Cleric of Silvanus special abilities: Can wear leather armor and wooden shield only, weapons allowed include spear, scimitar, and sling. Cannot turn undead, but may soothe natural animals with a positive reaction roll and may befriend an animal with an outstanding roll (may also turn animals). Uses spell list for clerics (allowed 2 1st level spells).

Erwin is a good with carpentry and woodworking, but has never learned to swim and is afraid of large bodies of water. 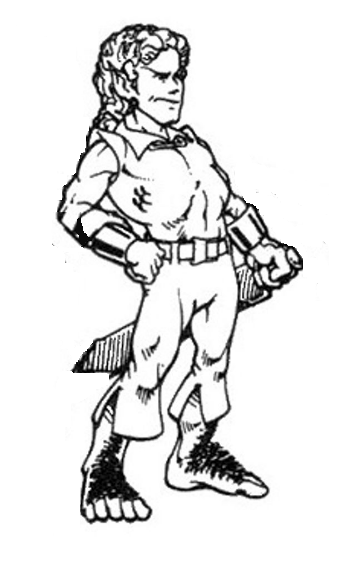 Languages
Common, Alignment, plus two additional languages
Special Abilities Due to a hobbits small size, giants, ogres, and their ilk do half damage. Hobbits gain +2 to missile attacks. Hide and move silently 5-in-6 chance. Saves vs magic are at +4.

Fungo is really good at smelling out liars, but he is really bad at games of chance. Languages
Common, and maybe some other local 'Hobbitish' dialect we don't yet know about.

Exceptionally bad at: Being brave, and NOT a fan of water!

Story:
Hailing from the Shire's of Eyre, Kettleshire specifically, Sammich doesn't come from a family of adventurers, so he's a bit of an outcast in that regard. Farmers and Chefs make up the majority of his extended family.

Mr. Buttonchubb would rather cook his way out of a confrontation; "Win them over with good eats, I always say!" He's rather keen with a bow, and enjoys the adventuring life despite being somewhat of a coward. Though he prefers to 'plink from afar' he would sacrifice himself for deserving friends.
Last edited by connivingsumo on Mon Jul 19, 2021 4:01 pm, edited 29 times in total.
Top Abilities/Restrictions: Free attack when an opponent drops w/in 5’; Use shield OR two weapon style
Combat fury: against foes of 1HD or less, get one attack per level each combat round.
+2 bonus on saves vs. death/poison
Berserker/Righteous Rage: 1/day, +2 att & dmg
Ambassador: +2 to reaction rolls

Naturally good at: Otis is Fleet of Foot. He loves to run - sometimes for no reason whatsoever.
Naturally bad at: Otis tends to get aggravated when people bully others or do bad things to others. (He is used to people making fun of him, so it doesn't faze him usually)

Story: Otis is a simple but friendly farmhand from Gyre who is on his own after the untimely passing of his parents. One day he just decided to run – trying to find his place in the world.
Last edited by badams30 on Fri Jul 16, 2021 2:25 pm, edited 10 times in total.
Top Special Abilities:
Combat fury: Against foes of one hit dice (HD) or fewer, Fighters get one attack per level each combat round.
Wilderness survival

Story: Susanna's always struggled to get along in the world, and life hasn't been especially kind to her, with her mother dying due to complications with childbirth. Susanna barely made it through those crucial early moments.

As a child she struggled to learn, but her father, a local mercenary, saw she had a talent for his trade. He taught her what he knew, hoping that it would be enough to ensure her independence in life. When he died she donned his gear and left the village where she had always been mocked. She's determined to make something of herself, in spite of everything.

(I don't have an explanation for the thing on her forehead! Maybe it can remain a mystery for now...)
Last edited by herself on Wed Jul 21, 2021 11:37 am, edited 5 times in total.
Beyond the Borderlands, Susanna Clank
Top
Post Reply
5 posts • Page 1 of 1

Return to “Beyond the Borderlands”