You know the drill; roll 3d6 six times straight down the ability scores.

Hit Points:
Re-Rolling 1s and 2s. If your roll for hit points comes up 1 or 2 (before applying any CON modifier), re-roll.

I have looked over the playable Dolmenwood races and for this campaign we will use the regular races. The Dolmenwood elves for example smacks of 1st edition. I perceive a distinct power creep and I don’t want things unbalanced. Let’s say the elves of Dolmenwood are a fae/fairy race unique to that part of the world. The characters at first will be strangers arriving at Dolmenwood by caravan.

Dwarves are stout, bearded demihumans, about 4’ tall and weighing about 150 pounds. Dwarves typically live under- ground and love fine craftsmanship, gold, hearty food, and strong drink. They have skin, hair, and eye colours in earth tones. Dwarves are known for their stubbornness and practicality. They are a hardy people and have a strong resistance to magic, as reflected in their saving throws.
Dwarves can use all types of armour. Due to their short height, dwarves can only use small or normal sized weapons. They cannot use longbows or two-handed.
As expert miners, dwarves have a 2-in- 6 chance of being able to detect new construction, sliding walls, or sloping passages when searching.
Due to their expertise with construction, dwarves have a 2-in-6 chance of detecting non-magical room traps when searching
Dwarves have infravision to 60’ (see Darkness, p106).
Dwarves have a 2-in-6 chance of hearing noises (see Dungeon Adventuring, p108).
A dwarf has the option of creating an underground stronghold that will attract dwarves from far and wide. Dwarves usually live in clans, so dwarves of the char- acter’s clan will be attracted to live under their roof. Dwarves from other clans will generally be friendly and clans may collaborate in times of war or disaster.
A dwarf ruler may only hire dwarven mercenaries. Specialists and retainers of any race may be hired..

Requirements: Minimum INT 9 Prime requisite: INT and STR Hit Dice: 1d6
Maximum level: 10
Armour: Any, including shields Weapons: Any
Languages: Alignment, Common, Elvish, Gnoll, Hobgoblin, Orcish
Arcane Magic
Spell casting: Elves carry spell books containing the formulae for arcane spells. The level progression table (opposite) shows both the number of spells in the elf ’s spell book and the number they may memorize, determined by the character’s experience level. Thus, a 1st level elf has one spell in their spell book, selected by the referee (who may allow the player
to choose). The list of spells available to elves is found on p63 (elves have the same spell selection as magic-users).
Using magic items: As spell casters, elves are able to use magic scrolls of spells on their spell list. They can also use items that may only be used by arcane spell casters (e.g. magic wands).
Elves can use all types of weapons and armour.
Elves have keen eyes that allow them, when actively searching, to detect hidden and secret doors with a 2-in-6 chance (see Dungeon Adventuring, p108).
Elves are completely unaffected by the paralysis that ghouls can inflict.
Elves have infravision to 60’ (see Dark- ness, p106).
Elves have a 2-in-6 chance of hearing noises (see Dungeon Adventuring, p108).
Elves are slender, fey demihumans with pointed ears. They typically weigh about 120 pounds and are between 5 and 51⁄2 feet tall. Elves are seldom met in human settlements, preferring to feast and make merry in the woods. If crossed, they are dangerous enemies, as they are masters of both sword and spell. Elves are fascinated by spells and beautifully constructed magic items and love to collect both.
Prime requisites: An elf with at least 13 INT and STR gains a 5% bonus to experience. An elf with an INT of at least 16 and a STR of at least 13 receives a +10% XP bonus.
See Magic, p56 for full details on arcane magic.
Magical research: An elf of any level may spend time and money on magical research. This allows them to add new spells to their spell book and to research other magical effects. When an elf reach- es 9th level, they are also able to create magic items.

Requirements: Minimum CON 9, minimum DEX 9
Prime requisite: DEX and STR Hit Dice: 1d6
Maximum level: 8
Armour: Any appropriate to size, including shields
Weapons: Any appropriate to size Languages: Alignment, Common,
Halflings have an uncanny ability to disappear from sight:
▶ In woods or undergrowth, a halfling can hide with a 90% chance of success.
▶ In dungeons, a halfling can hide in shadows or behind other forms of cover. The chance of success is 2-in-6. Hiding requires the halfling to be motionless.
Halflings have a 2-in-6 chance of hearing noises (see Dungeon Adventuring, p108).
Halflings’ keen coordination grants them a +1 bonus to attack rolls with all missile weapons.
Any time a halfling wishes (and has sufficient money), they may build a stronghold, which will form the basis of a new community of halflings. Halfling communities—known as Shires—are typically located in gentle countryside of little rivers and rolling hills. The leader of the community is called the Sheriff.
Halflings are small, rotund demihumans with furry feet and curly hair. They weigh about 60 pounds and are around 3’ tall. Halflings are a friendly and welcoming folk. Above all, they love the comforts of home and are not known for their brav- ery. Halflings who gain treasure through adventuring will often use their wealth in pursuit of a quiet, comfortable life.
Prime requisites: A halfling with at least 13 in one prime requisite gains a 5% bo- nus to experience. If both DEX and STR are 16 or higher, the halfling gets a +10% bonus.
Halflings can use all types of armour, but it must be tailored to their small size. Similarly, they can use any weapon appropriate to their stature (as determined by the referee). They cannot use longbows or two-handed swords.
Due to their small size, halflings gain a +2 bonus to Armour Class when attacked by large opponents (greater than human-sized)

When done with the rolls, complete your character using the format provided further down this thread and post in in the Rogues’ Gallery.

** This page is still in progress **
Top

Are we starting with only humans (Cleric, Fighter, Magic-user, Thief)?
Top

Are we using a die roller? If so, your preference?
Top

No, you can play Dwarves, Elves, and Halflings.
Top

I’ve only used the one on Unseen Servant. I’m open to other suggestions.
Top

No, you can play Dwarves, Elves, and Halflings.

I get it. You’re referencing the OSE Basic pdf which is free. Either plunk down the cheddar for the Player’s Tome pdf, play one of the human classes, or I can send you the race as class info.
Top

I don't know of any decent die rollers that integrate with the forum software. Ref's choice of course, but I'm inclined to just roll the dice myself. I'm guessing we can all be trusted

Let’s do it, then. Roll your own dice and write ‘em down.
Top

Just noticed you did not mention starting gold - if you have something else in mind, disregard!
--
Erwin Dirtnap, Cleric of Silvanus
Delth Smallhook, Halfling Rogue
The Smoldering Wizard
Top 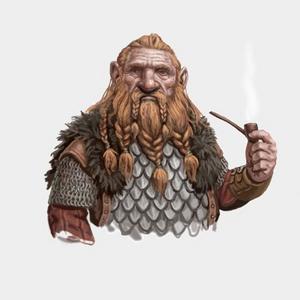 Jory was nominated to adventure on the surface lands by his fellow guild dwarves. He received high praise and was given a copper medallion of attendance by the dwarven miner's guild. The guildmaster said to Jory, "You've got to go...yes....go and see how the other folk are doing and don't come back...er..I mean, don't look back!"
Jory packed his rucksack and set off for adventure in the human lands. The miners were relieved and promptly went back to work.

Jory is an expert on most things, even the things he hasn't thought about before. He is headstrong and acts first before considering the consequences. ***Disclaimer~this is in no way how the player tends to act. It will be a great stretch to play a character like this.***

Return to “Adventures in Dolmenwood”