Exploring the elder, esoteric Lands and Environs of the D&D Wilderness. When we have time.

Please use the following template for your character.

Character Name:
Class:
Alignment: (You don't have to reveal your alignment to other players, but you must reveal it to the DM)

Picture: (optional; 100 XP bonus if you draw your own character portrait!)

Mount(s): There are no mounts in the basic set, and you won't be needing them for this adventure.

Mount(s): There are no mounts in the basic set, and you won't be needing them for this adventure.

Additional information: Fauk came down out of the northern hills. That is enough. He will write his story in the blood of his enemies.
https://damnelfpress.com/
Top

Backstab: Must catch an opponent unaware using move silently and hide in shadows. The thief will receive an attack bonus of +4 and will multiply all damage by 2.

Read Languages: At Level 4, a thief can read languages (any) with 80% probability. This ability does not include magical writings. If the roll does not succeed, the thief may not try to read that particular piece of writing until s/he reaches a higher level of experience. Back story: "Slip" is her guild given name, her code name. It is what she goes by and how she introduces herself. She does not belong to a "Thieves' Guild" but rather to a Guild of Scouts and Cartographers, "The Compass."

Born a noble, she objected to her pre-arranged marriage and to the life of a wife and Mother. Her talents and interests: exploring, sneaking, climbing, archery, tinkering, and map making were ignored with utter contempt. Her excellence at these skills, and more, mattered not; she was forced to marry.

She didn't hate her Fiance, but she didn't like him either. It was hard for her to respect him because she was a better archer and tracker than he was, despite his "wild boar hunts" that rarely resulted in him actually shooting anything. She bested him in archery every, single time. Once when he visited her parent's estate, he had forgotten to bring the key to his luggage. Slip picked the simple lock in a matter of seconds, for which she was quickly scolded by her parents, and looked at awkwardly by her future husband.

Our Scout is on the run now. Before the wedding could happen she slipped off into the night never to return. That was three years ago, and she's been with "The Compass" ever since. She has graduated from her Apprenticeship and is allowed to work on her own; however, with regulated notice she must be available for Compass work if the need arises.
Last edited by connivingsumo on Fri Jun 18, 2021 6:09 pm, edited 22 times in total.
Top 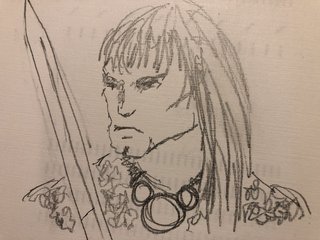 Mount(s): A giant seahorse, like Aquaman from the old Super Friends tv show, except he rides it over land... Additional information:
Bert was born in a sleepy farm town near the capital, and spent most of his years working as a laborer for the local farmers. Bert is a jovial fellow and loves to help & chat with anyone who will listen. Originally a casual follower of the old gods, he met a traveling priest of the One True God, and found his calling. He decided to sell all his belongings and dedicate his life to the church, and more specifically - helping others.
Upon finishing his training at the church, he has been tasked to help in the construction of the new cathedral until such time as he's ready to depart and begin his good works. He's stuck around a bit longer than he planned as his nephew Tor has been sent to the city for Bert to "civilize him" somewhat. Despite not being around Tor much in his youth, Bert is quite fond of the young warrior, and has been introducing him to some of the locals, and in turn Tor has been helping at the church for some extra coin now and then. Bert is anxious to hit the road, and he know's Tor feels the same. Although both different in demeanor, they are very much alike in this way.

Bert is in his 40s, and despite his balding noggin and few extra pounds on his tall frame, he is more energetic than he looks. Years of farm work have made Bert quite resilient, and he doesn't shy away from getting his hands dirty whenever needed. Bert's sunny disposition makes him a good evangelist, and he's earned a fair number of converts in his early efforts, so his superiors are anxious for him to ply his skills and piety on the road.
Bert is a simple man, he doesn't like flashy clothing or gear, and he tends to donate most extra coin that he collects. If he has one weakness, it's a fondness for booze. While not a drunk, Bert likes to "take the edge off" with a swig of liquor when needed. His superiors frown on this quirk of his, but because of his ability to relate to common folks, they tend to overlook it. Bert epitomizes the "living in the moment" mindset, and he's cheerfully enjoying this new career, and he's just waiting for the opportunity to find a vehicle to hit the road with Tor and help others while spreading the faith.
Top
Post Reply
5 posts • Page 1 of 1

Return to “Dwellers of the Forbidden B/X Basement”